The Australian federal government provided a limited number of interim allocation places to all states and territories before full allocations are released in October as part of the 2020-21 Federal budget. Most states have now published state-specific skills occupation lists and requirements for the interim period and have resumed processing nomination applications after the initial temporary closure. The nomination process varies between states, but all applications will be prioritised according to the critical skills required by the states and territories during the COVID19 pandemic and post-pandemic recovery. 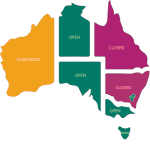 The interim numbers of 190 and 491 primary applicant invitations allocated by the federal government to each state and territory for a period until 30 October 2020 are shown in the following tables.

The final size and shape of the 2020-2021 state and territory nominated programs will be announced when the Federal budget is handed down on 6 October. However, it is expected that these programs will remain focussed on COVID19 response and post-pandemic economic recovery.

The interim allocation places will be used to support the COVID19 response and the economic recovery. The status of the states and territories nomination programs is shown below and is based on the latest updates published by the respective nominating authorities.

Australian Capital Territory
The Canberra Matrix is closed to overseas applicants and is restricted to Canberra residents with skills on the ACT critical skills list. The Matrix is ranked by occupation and invitations may not be issued if an occupation cap is met.
New South Wales
Invitation rounds for subclass 190 visa nomination are expected to commence shortly, but only applicants in selected health, ICT and engineering occupations and who currently reside in NSW will be eligible for invitations.
No new applications for subclass 491 visa nomination are accepted at this time. The interim allocation places will be filled by applicants from the previous financial year who continue to reside in regional NSW and whose occupations are in health, ICT and engineering.
Northern Territory
Onshore General Skilled Migration (GSM) nomination applications are accepted and assessed, but offshore GSM nomination applications remain closed until further notice. However, MigrationNT has not made any announcements yet regarding interim nomination process.
Queensland
The BSMQ business and skilled programs remain suspended.
South Australia
The skilled migration program is open to applicants who satisfy nomination requirements and are currently working in South Australia for at least the last 3 months in the nominated or closely related occupation. International graduates of South Australian education institutions who have completed a PhD or Masters by Research are exempt from the work experience requirement.
Tasmania
Skilled migration program is open to onshore applicants with critical skills. Overseas applications are only open to occupations in the High Demand section of the Tasmanian skilled occupations list.
Victoria
The skilled nomination program is restricted to applicants who are living in Victoria and have been working for a minimum of 6 months in health or medical research. Eligible applicants must submit a Registration of Interest for Victorian state visa nomination.
Western Australia
The WA nominated migration program remains suspended and invitation rounds are paused.